George RR Martin’s A Song of Ice and Fire series is a standout favorite for those who love depth, intrigue and epic fantasy. There are subtle details and hidden clues in great number, and those who pay close attention are rewarded over and over, and a re-read seems like a whole new book. Many of you will agree… it’s quite addictive. History of Westeros creates podcasts for those who want to get more out of the story.

Aziz and Ashaya have made a practice of being thorough and critical when covering any topic, and their love for the material really shows. Part lecture, part firey sermon, part silly, no audio analysis of Westeros and its storylines is as focused or comprehensive.  Whether during the series or guessing at what comes next, from the Dawn Age to the Targaryen Conquest, we cover the history and current status of houses great and small.  Particular attention and coverage is given to unreleased material you probably didn’t know existed, as well as questions GRRM has answered over the years that illuminate things not covered in the books.

There are numerous ways to search episodes, notably the search tool. Type in the name of a character, house, place or topic and it will display any episodes discussing those items.  We have an extensive collection of links to various ASOIAF artists, and forums for discussing anything and everything.

Steve the FriggenItalian is no longer with the show, but without him it would never have existed. This podcast was his idea and his initial effort made it possible. His friendship with musician Joey Townsend (SoundCloud) gave us our catchy theme song. He is greatly missed since his passing.

Some early episodes show our previous lack of experience with recording and content management, but we think you’ll enjoy them thoroughly despite their imperfections.

We have had a few different backgrounds in our videos, for those of you who watch rather than listening to the podcast. The poster on the far right was done by an artist who doesn’t want an online presence currently, so we can’t direct you anywhere in that case, but the large board game poster was done by West2Productions (it is a 9-player map that we printed and created our own cards for). Later videos have a map by BensMind. Our most recent videos have the fantastic map with Westeros across the top, done by Michael Klarfeld.

We also wear a variety of t-shirts when recording; shoot us an email or a comment on the specific video for a link to the various stores we purchased them from.

You can find all of our social media links to the right, but here is our official Twitter account – @WesterosHistory.

Favorite secondary house: Hightower today, Dayne tomorrow. My name IS Ashaya, which fits pretty perfectly with Dayne, and they have a purple sigil…but house Hightower is also so intriguing, and living in Oldtown would be really amazing. Plus, as a Hightower you could probably visit the Citadel’s library any time you wanted despite being female, too.

Favorite book in the series: A Feast for Crows for many, many reasons, namely because Feast is the ‘expanding’ of the series in my eyes…it has our first look at Dorne!

Favorite POV: This questions is difficult for me. Purely based on amount of chapters, it would be  Tyrion or Arya. Based on my favorite change in the character, Jaime.  If I were basing this on characters I myself identify with most, Sansa. Not a contender due to amount of chapters is Arianne, however I love seeing Dorne and I am particularly interested in her TWoW plotline.

What are some of your other favorite authors and books? I love The Expanse series, Edward Rutherfurd’s historical epics, Brandon Sanderson’s ‘cosmere’, Patrick Rothfuss, Flatland: A Romance of Many Dimensions, C.D. Payne’s series of comedic novels, Gregory Maguire’s takes on fairy tales, the webseries Worm… I largely prefer books with female main characters, or at least prominent female characters. I have no patience for shoddily written characters and I have a love of in depth worldbuilding.

How did you get into the series? Some months before the television show aired its first season, I was told to read the series by a friend (many friends, actually, including Aziz). When I heard that it was being made into a television show, I knew I had to start reading the books before seeing a single thing from the show so as to get an image of the characters in my mind. I read the first half of A Game of Thrones, then watched the beginning of season 1 as it aired, continuing to read the second half as I watched the show. It was awesome, seeing the books come to life so quickly after reading certain scenes. By the time season 1 was over, though, I had finished the first 4 books and was left to wait for A Dance With Dragons with the rest of you.

Other hobbies: I love comedy TV shows and movies. I am absolutely obsessed with many of them, shows like Parks and Recreation, It’s Always Sunny in Philadelphia, Broad City, Community, etc. Only a few dramas that I watch, and even those tend to have a bit of comedy in them. Also fond of the various Game of Thrones inspired games, specifically the board game and the Crusader Kings 2 mod, as evidenced by the Games of Ice and Fire page. I love modding the board game, creating new cards and scenarios, and if anyone is ever interested in collaborating and making a new expansion for the board game, send me a message. 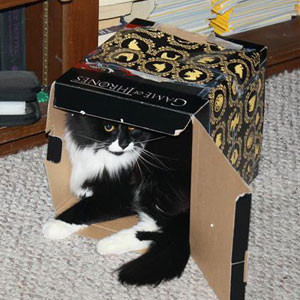 Favorite great house:  Targaryen, but mostly because we know so much about them.  Could easily change when the World of Ice and Fire book illuminates others.  Stark is probably second. My favorite house sigil is the Greyjoy kraken though!

Favorite secondary house:  Really tough choice, but I like the houses that have ancient roots and stick to old traditions.  Royce, Dayne, Yronwood & Blackwood are at the top of the short list.

Favorite book in the series: A Storm of Swords.  The reason is simple.  I pretty much love every page of every book and Storm has more pages than all but Dance, so that narrows it down easily enough.  It’s a close call there, but Storm gets the nod.

Favorite POV: Close call between Tyrion and Victarion.  Tyrion because I love intrigue and his chapters have the best of that, and because he’s hilarious.  His level of knowledge is a major point too, his chapters have a lot of history in them.  Also he’s one of the more relatable characters in a series full of unrelatable characters.  Which is precisely why I love Victarion, because he’s so different from me and anyone I know.  A dim man with great instincts, full of superstition and aggression.  George has managed to make hated characters likable, but in this case he’s made a brute who is actually psychologically complex.  He’s a terrible person, but I like seeing his thoughts and watching what he does.

Why does A Song of Ice and Fire stand out so much?: I was a big fan of fantasy when young, and a big fan of history and historical fiction when a bit older. A Song of Ice and Fire has elements of both, because George is a big fan of history himself.  It shows. Ancestors and bloodlines and dynasties are very important aspects of the story.  History repeats itself and all humans feel the weight of decisions made by those who came before. It matters a lot to me that A Song of Ice and Fire shows GRRM’s strong grasp on psychology and human nature on top of all the history.  At some point I realized that I actually never outgrew fantasy, it was more that adult fantasy is a near non-existent genre, but once I found it I was hooked.

What are some of your other favorite authors and books?: Mary Renault (historical fiction.  Every single book she wrote, but especially Last of the Wine and The King Must Die), Sharon Kay Penman (more historical fiction, her Welsh trilogy.  A Sunne in Splendour is a must for ASOIAF fans because it is a detailed multi-pov epic set during the War of the Roses) Robert Anton Wilson (the Illuminatus trilogy, Victor Davis Hanson (history and historical fiction), Neal Stephenson (Cryptonomicon is fantastic), Plutarch (Lives of Famous Greeks and Romans), H.P. Lovecraft (the only horror writer I truly enjoy, I love his style).  My favorite other book by GRRM is Dying of the Light.

How did you get into the series?: I discovered A Game of Thrones in 2000 when a friend Alex handed me the book and said “you should read this”.  When I finished, I was on a work trip to the West Coast and circumstances left me with no car. Thinking of several of the characters I had just read about, I decided to walk to the nearest bookstore and bought Clash and Storm. I endured the 6 year wait for Feast by delving as deep into the material as possible, reading forums and re-reading enough times that I lost count.

Other hobbies: Gaming (especially ASOIAF related games), guitar (I studied classical guitar in college), live music (mostly metal and EDM), comedy TV, books, history of all sorts, baseball (I’m a stats geek and have loved the Atlanta Braves since I was 5). I also enjoy playing poker, more specifically online poker. It may seem intimidating, especially if you’re in the USA, but it is not. I have two recommendations for ways to find places to play:
Check out: Professional Rakeback and Beat the Fish.